Info
Resources
We’re as close to an island as you can get without being one. Perhaps that is why Floridians feel familiar with water yet unfamiliar with the critical role it plays in our daily lives. There are those who see the ocean on daily commutes to work. There are others who take a trip or two on a blisteringly hot summer day to fit in some beach time. All the while, many Floridians may owe their livelihoods to the ocean and waterways of the Sunshine State. No matter the amount a Floridian sees water, there is no denying that the mistreatment of our planet is wreaking havoc on marine life and the resources we take for granted. We are, on average, a mere six feet above sea level. If anyone need worry about rising seas or an influx in natural disasters such as hurricanes, then it should be Floridians.

With that said, our collective was tasked with examining topics such as climate change, pollution, and the environmental changes happening in our lifetimes. Being artists who live in Florida, with most born in the state as well, it was not hard to summon feelings or thoughts which had already flowed in our minds on these subjects. Some of us grew up on boats and understand how delicate and crucial a healthy ecosystem is to all living creatures – humans included. Others have jotted down visual symbols of our state and the natural occurrences which make it unique in its own right, while some explored more metaphorical or symbolic approaches to dissecting the matter at hand.

This collection of images was pieced together by members of Separate Checks, an artist collective based in Tampa, Florida. 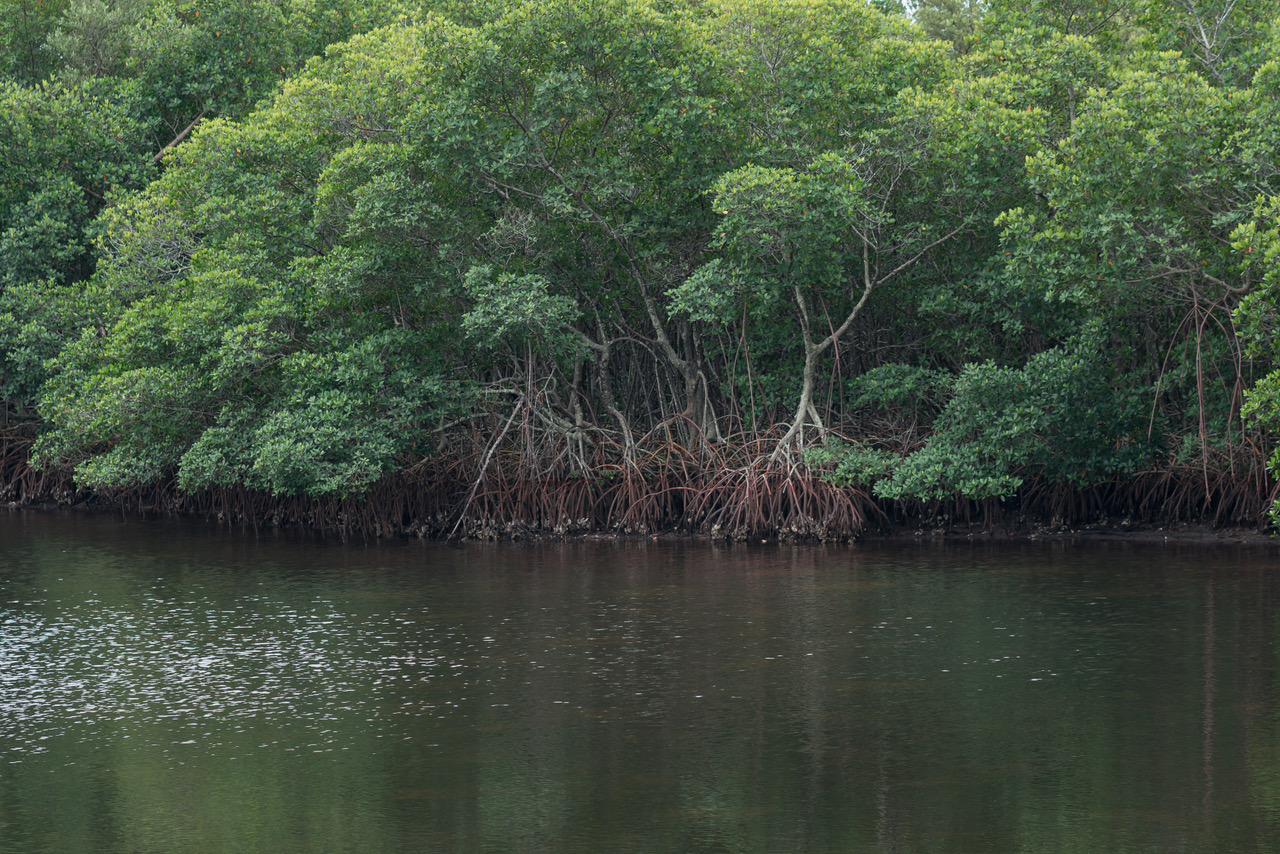 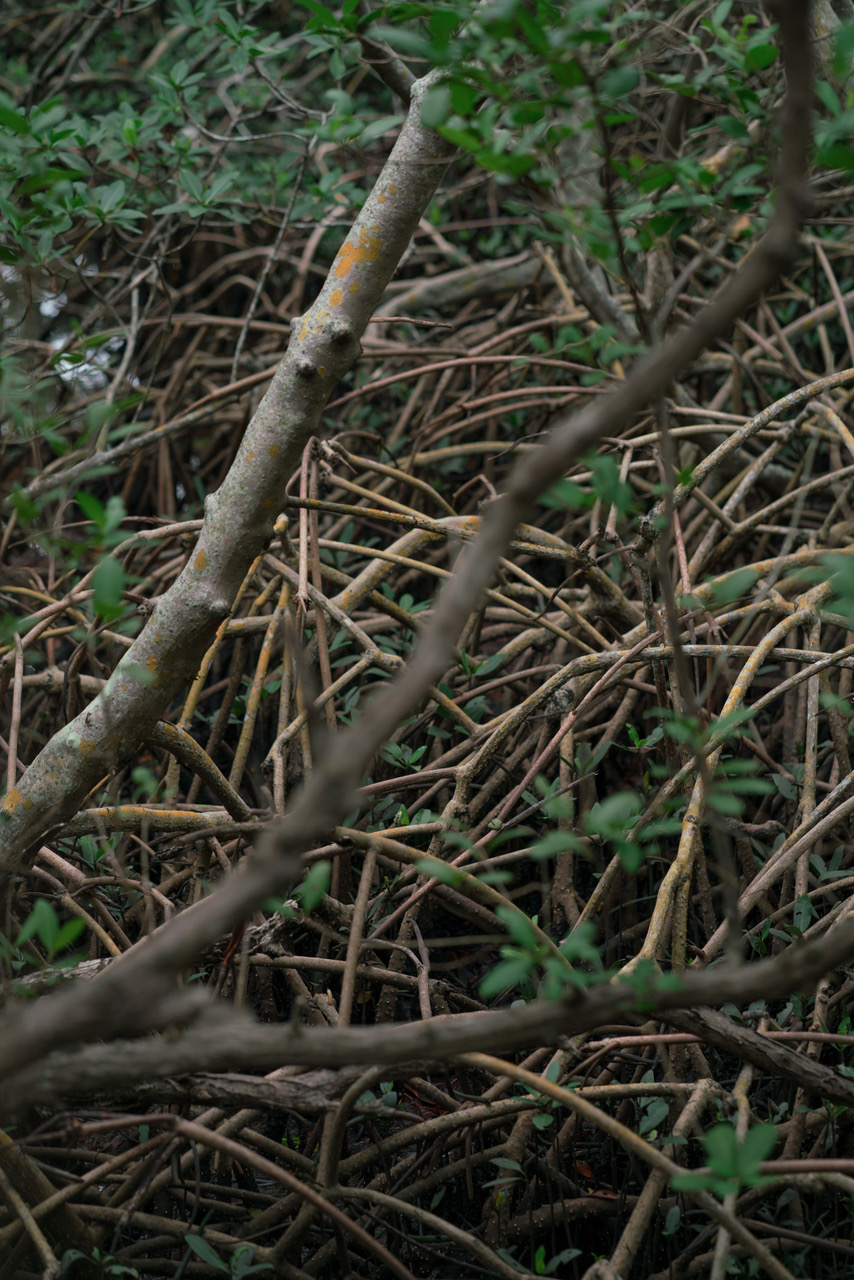 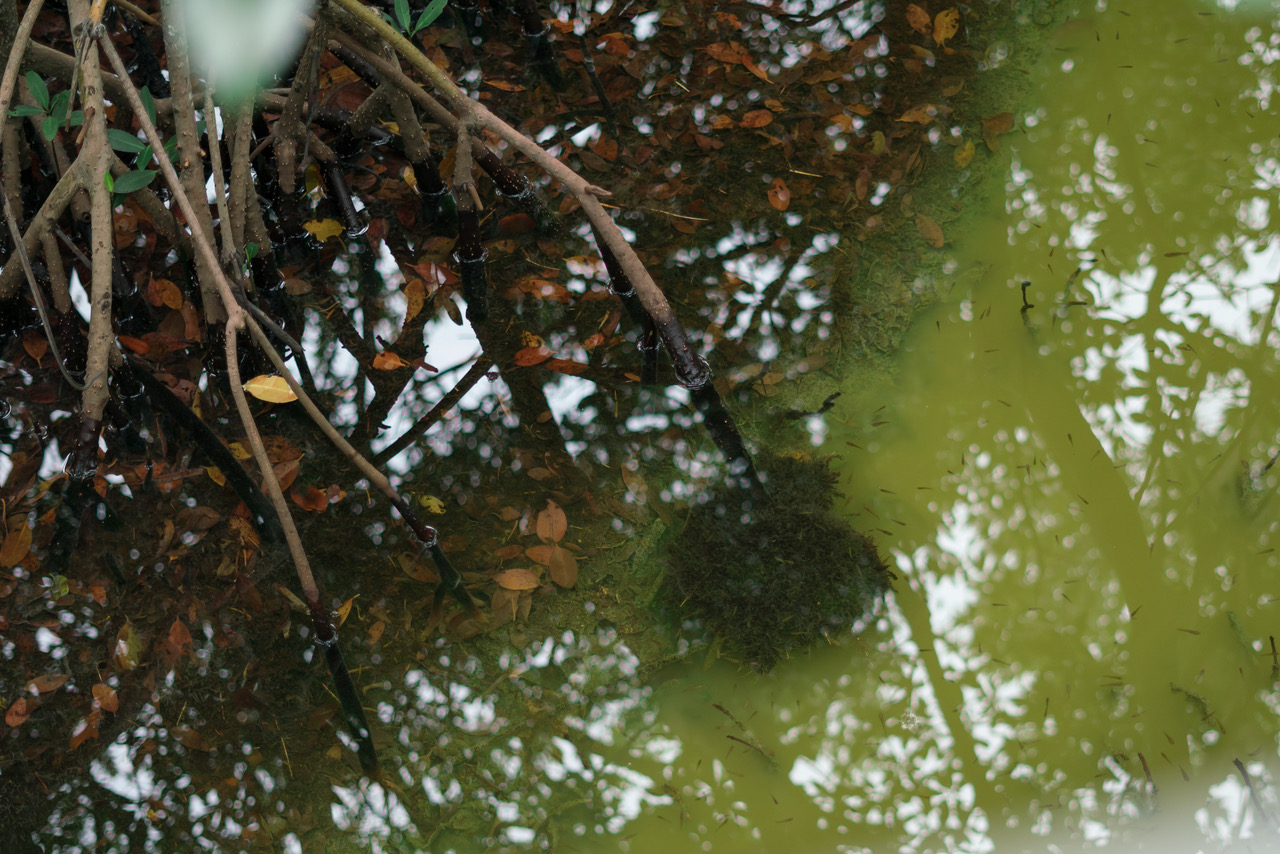 From almost anywhere in Tampa, dense Mangrove forests are half an hour away, or less. These trees, with their tangled root systems, play a vital part in Florida’s coastal protection as well as serving as a nutrient rich ecosystem for hundreds of species, animal and flora alike. Mangroves thrive in brackish water, a mixture of fresh water and saltwater, however with rising sea levels, their root systems are either being drowned or inundated with waters too high in salinity. The articles accompanying these images serve to provide additional information on the importance of Mangroves and to showcase a few different sea-level scenarios that could play out in our lifetime.
Coastal Forests
Aaron Castillo 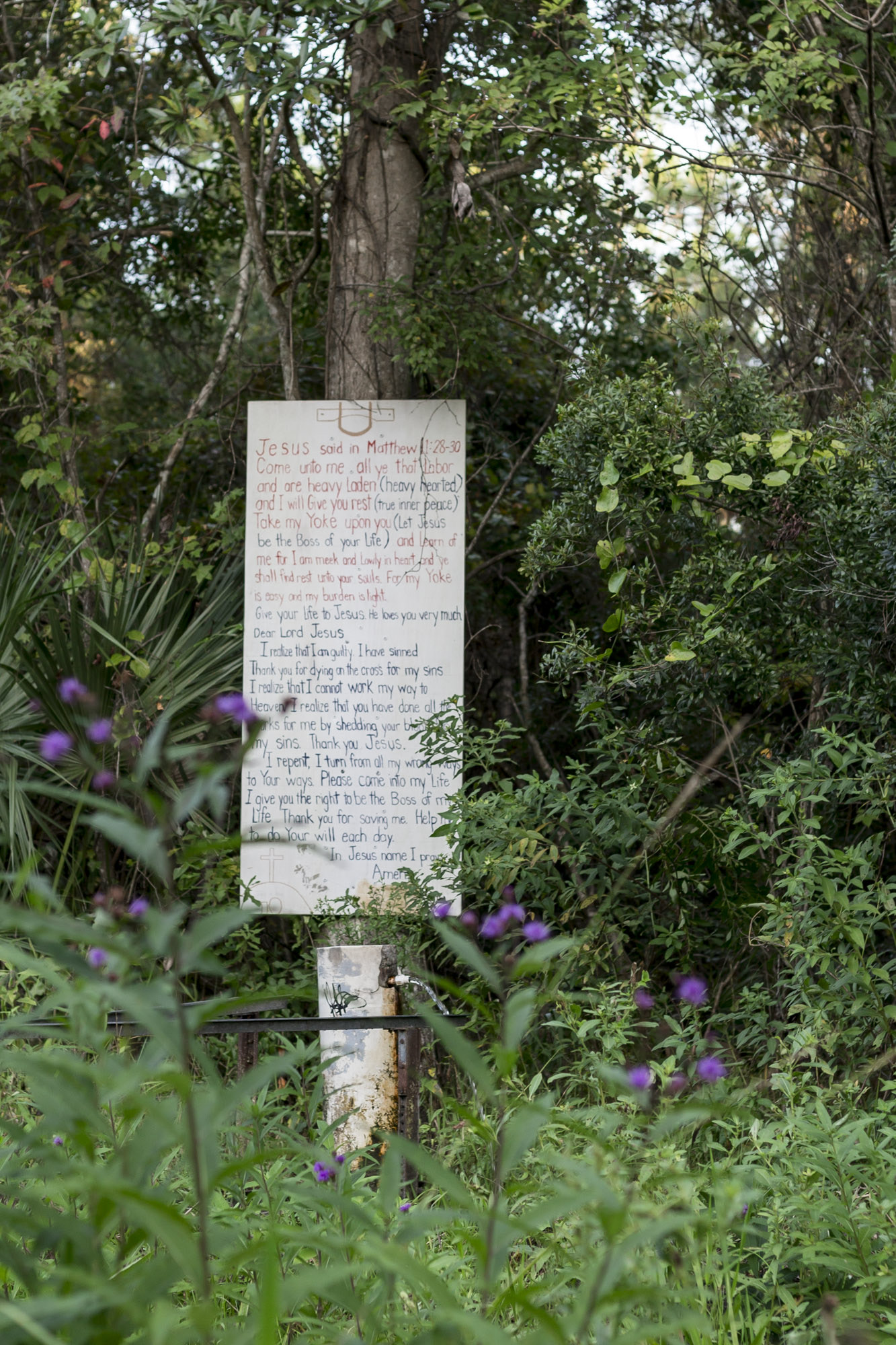 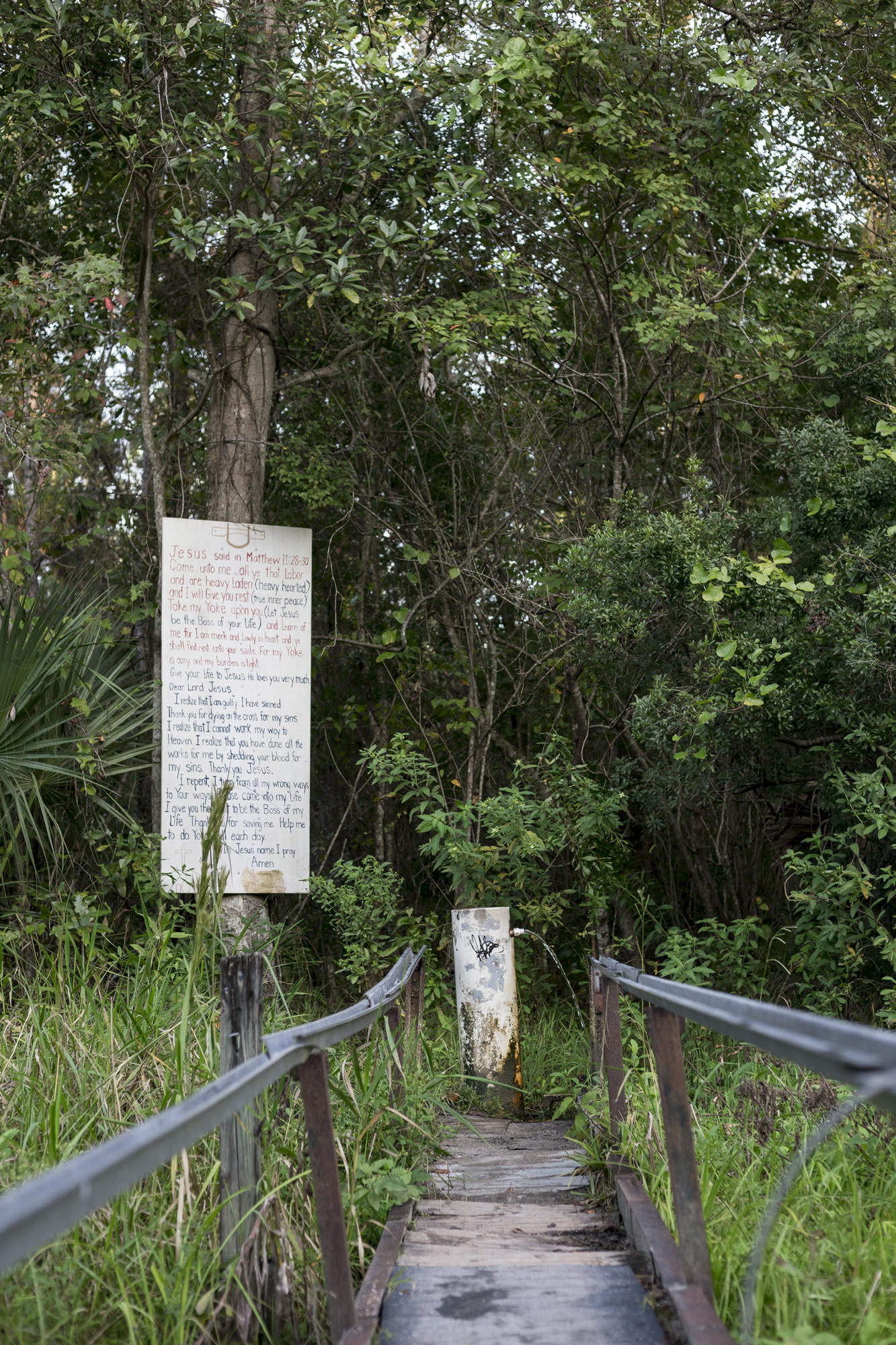 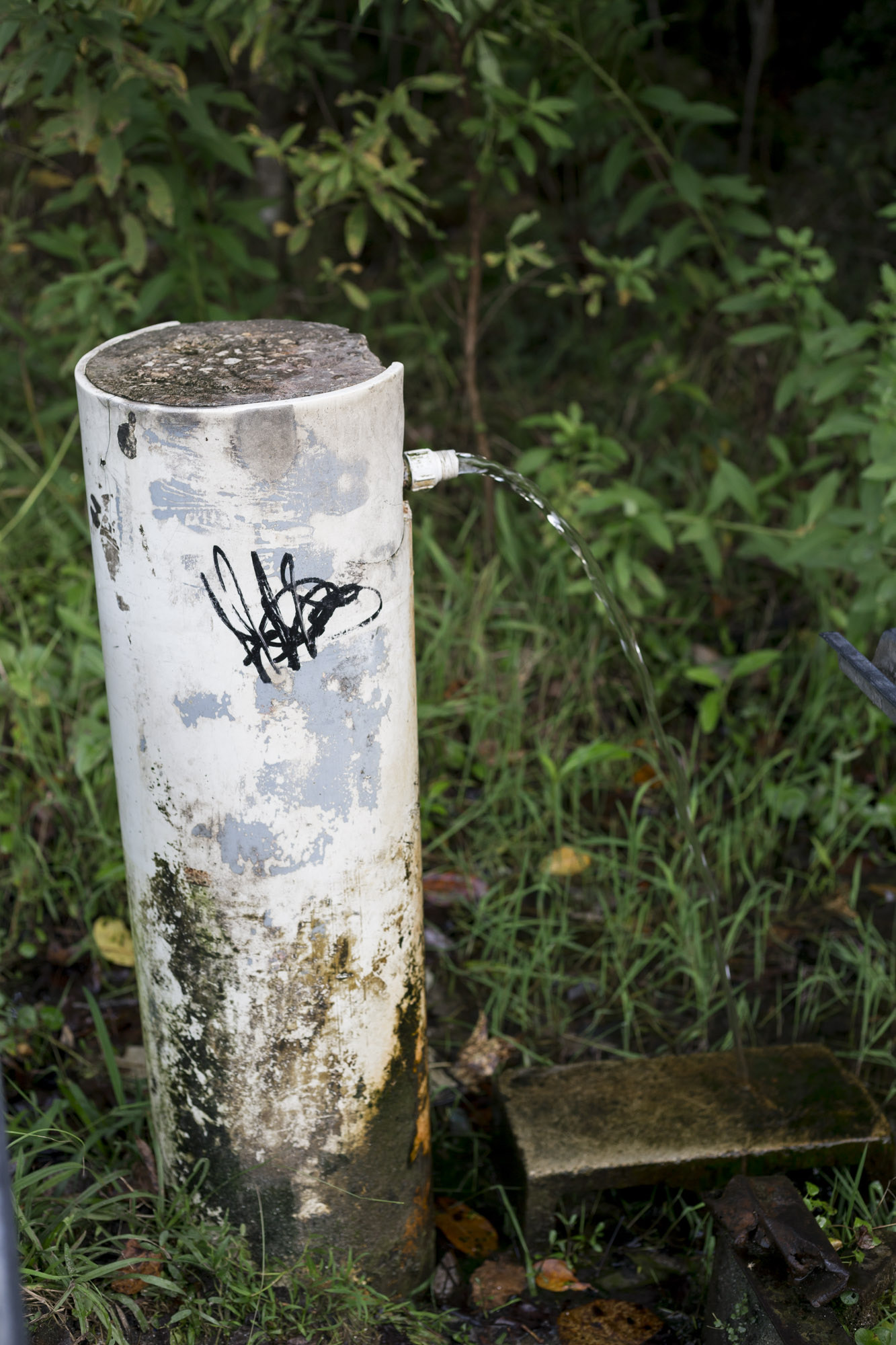 Jesus' Water Fountain
Krista Darling
These images come from a literal local watering hole I pass every time I go home to Jacksonville, Florida. On the side of a back road, not too far from the only food joint in the area, there is a small walkway in the woods that leads to a constantly flowing fountain of fresh spring water from the Artesian Aquifer. Before stopping to take these images I always thought that the big white sign next to it was something positive. Perhaps it was thanking Jesus for providing free water; turns out it's just your typical backwoods, vengeful god worshipper who whips their own back for their sins.

I was interested in the intersection between what the earth can naturally provide for people versus the mindset of religious followers who think only god could think to put a fountain there. It was this interchange of ideas that got me thinking about our current state dealing with ideas of climate change, in terms of who believes scientists and who brushes it off and chucks it up to an angry god for our sinful ways. Living in Florida, one comes to cherish our clear blue water and the wildlife it brings, however, tourism, large amounts of road runoff, and agricultural runoff has begun to seep into these watersheds that sit so close to the surface. It will take human consciousness, not divine power, to keep Florida’s water clean and thriving.
Deepwater Kitsch
Adam Mathieu
In 2010, I entered my tenth grade English classroom to see a low-resolution video of a black cloud playing on the projector. It was the live feed of the almost month-long BP Deepwater Horizon oil spill in the Gulf of Mexico. It would become one of the worst environmental disasters in U.S. history. I was aware of the disaster already, but I don’t think until then I had considered exactly at what rate the oil was gushing into the open waters. I was young then and didn’t quite understand the repercussions or widespread waves the disaster would have.

These days, as a Tampa resident, I’ve become fonder of Florida than I was as a teenager. In my photographic work, I’ve taken to owning the Florida aesthetic rather than attempt to avoid or ignore it altogether. For this project, I sought a way to marry that kitschiness with the impression this oil spill left in my mind. The offspring of this marriage is a found pink Florida oven mitt. A kitschy tourist item that is meant to handle the heat and will inevitably get spattered and stained throughout its lifetime - as is already evident in this photo. On one side we see the state as we want to perceive it, while on the other side we see the underbelly that takes the true brunt of our actions. 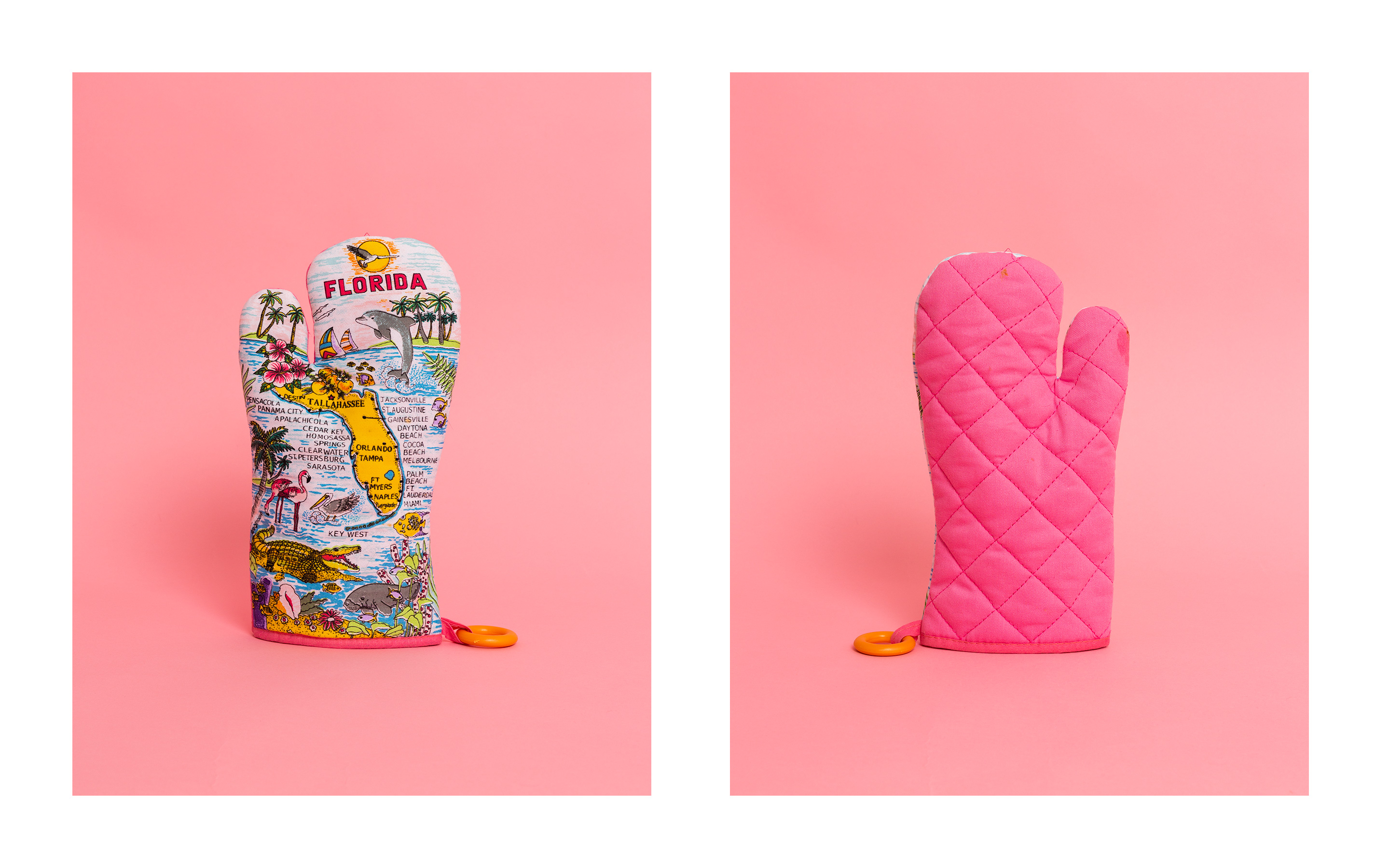 15 Pound Test
Katelyn Montagna
Throughout my childhood and even today, my dad has worked as a captain on a charter boat. Though his schedule was somewhat unpredictable, the routine of the job was always the same. Over the years I would accompany him on his charters, where I learned to appreciate the predictability of the routine.

From leaving the dock to dropping the anchor, these things were always the same. Even the blood that came from hooking the bait didn’t bother me, as it was just another step in the process. I remember the bait fish being “normal” size and the eventual catch appeared to be humongous. I wanted the scale of this polaroid to represent my childhood perspective of how large every keeper fish looked to me.

There is something about the instant tangibility of a polaroid image that parallels with the act of fishing. A seemingly carefree task that is still somehow fraught with routine and demands careful attention and respect. There is more to fishing than the casting of the line, there is more to a polaroid than the pressing of the shutter. 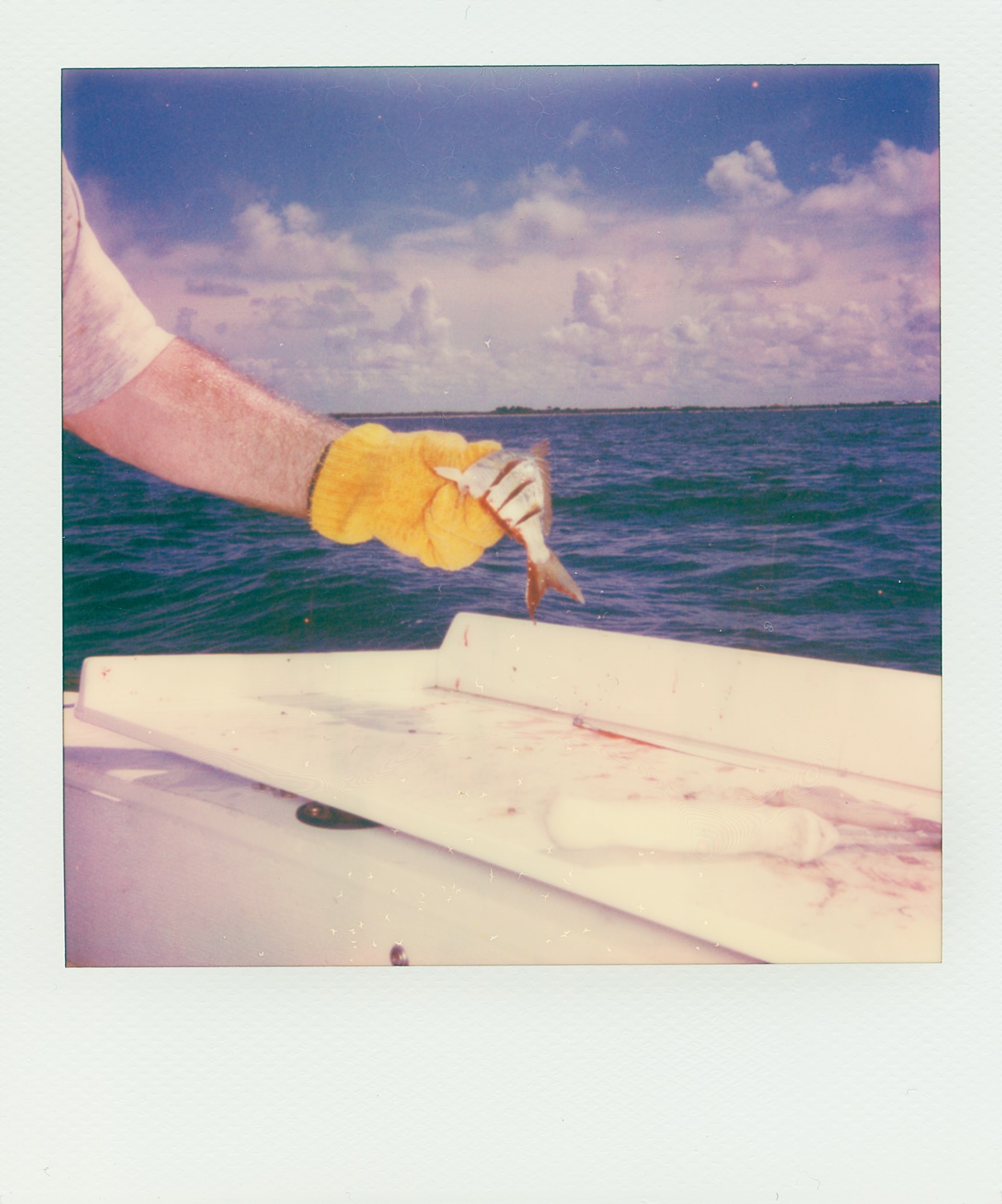 No More, Honey! [1]
Polluted Waters [2]
Erika Schnur
This body of work is derived from a series titled "Under the Rug" which serves as a vehicle to challenge and confront the dismissive attitude of key political figures on matters of grave importance to our society’s future and sustainability. Over the last few years, we’ve seen Tampa, Florida drastically impacted in various ways due to increasingly intense weather patterns. As a result, there have been extreme decreases in the population of Florida’s honeybees while the number of marine life killed by toxic red tide continues to rise. Through these images, I work to provoke and incite conscious oscillations in the course of inviting viewers to indulge in my form of artistic activism through activated spectatorship. 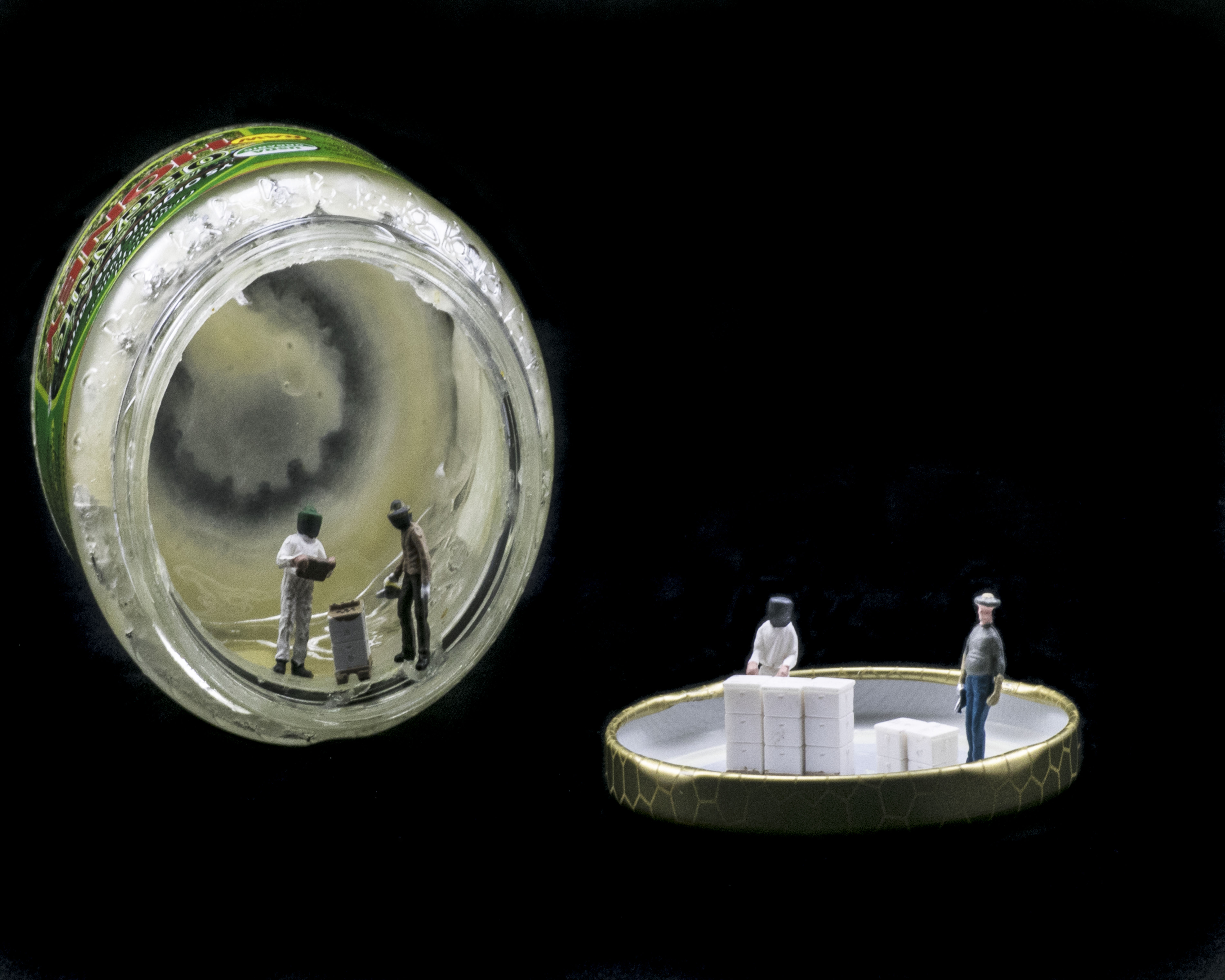 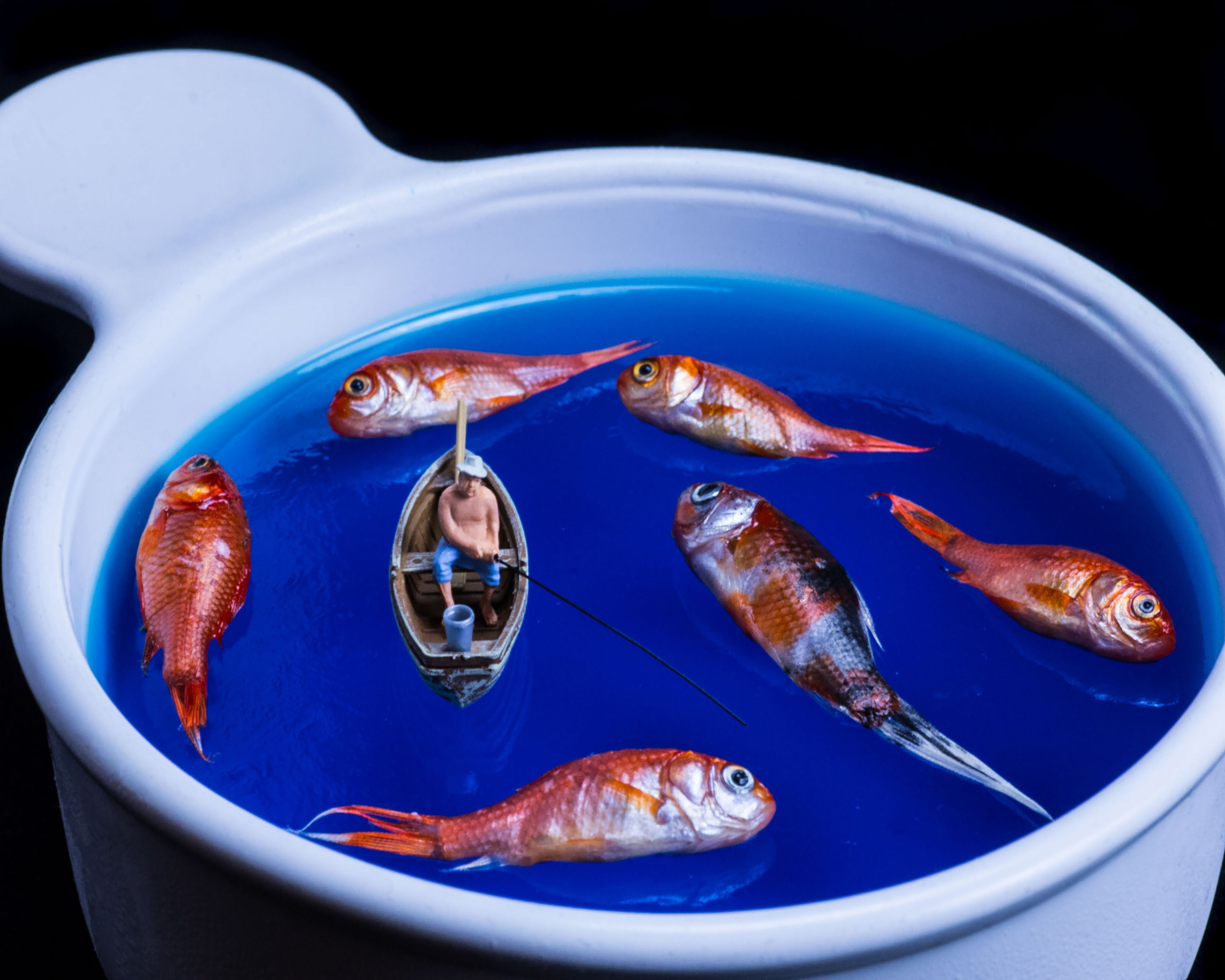 "Loves the Heat (Self Portrait as a Floridian)" shows a dead Lantana plant on the front porch of my childhood home. 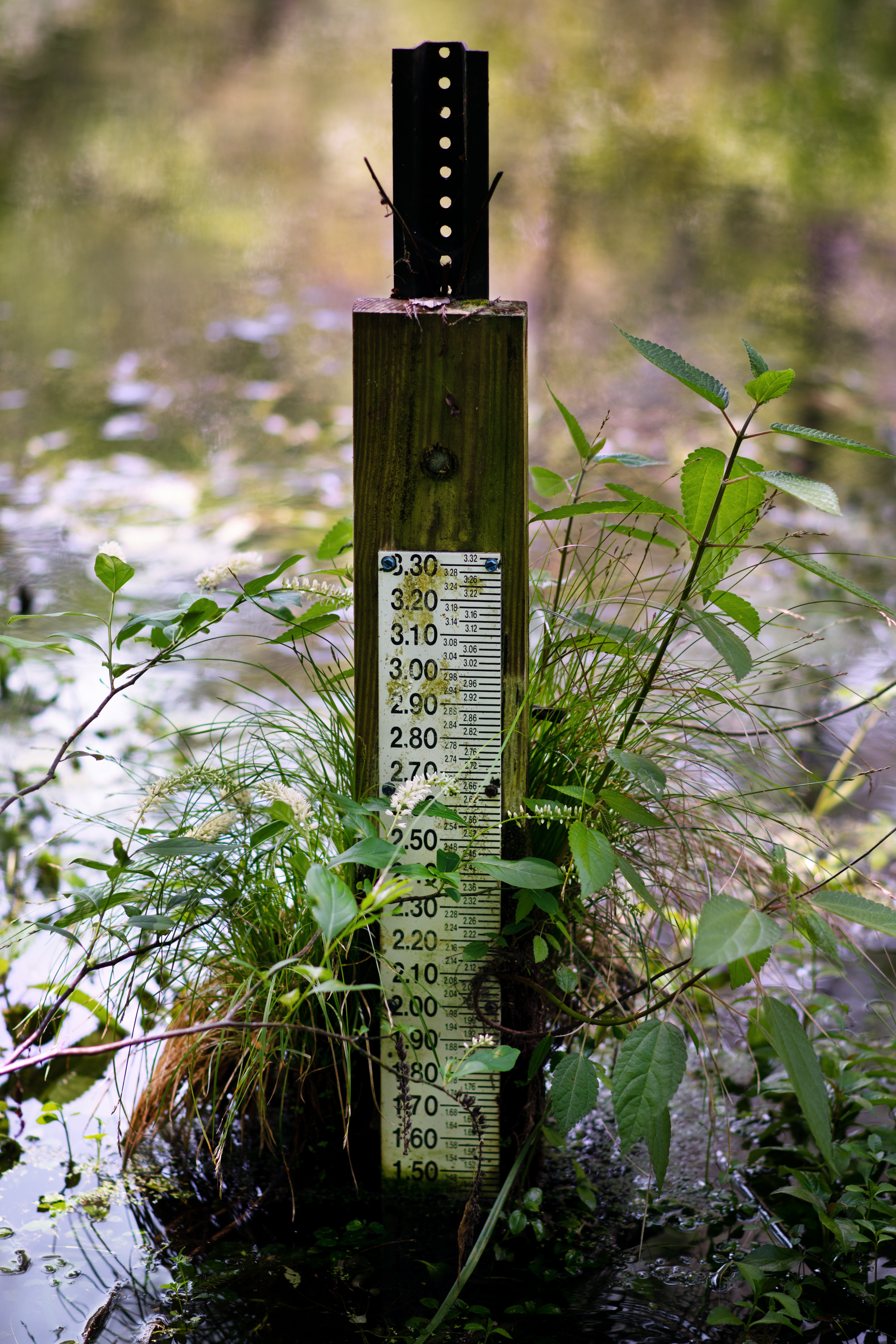 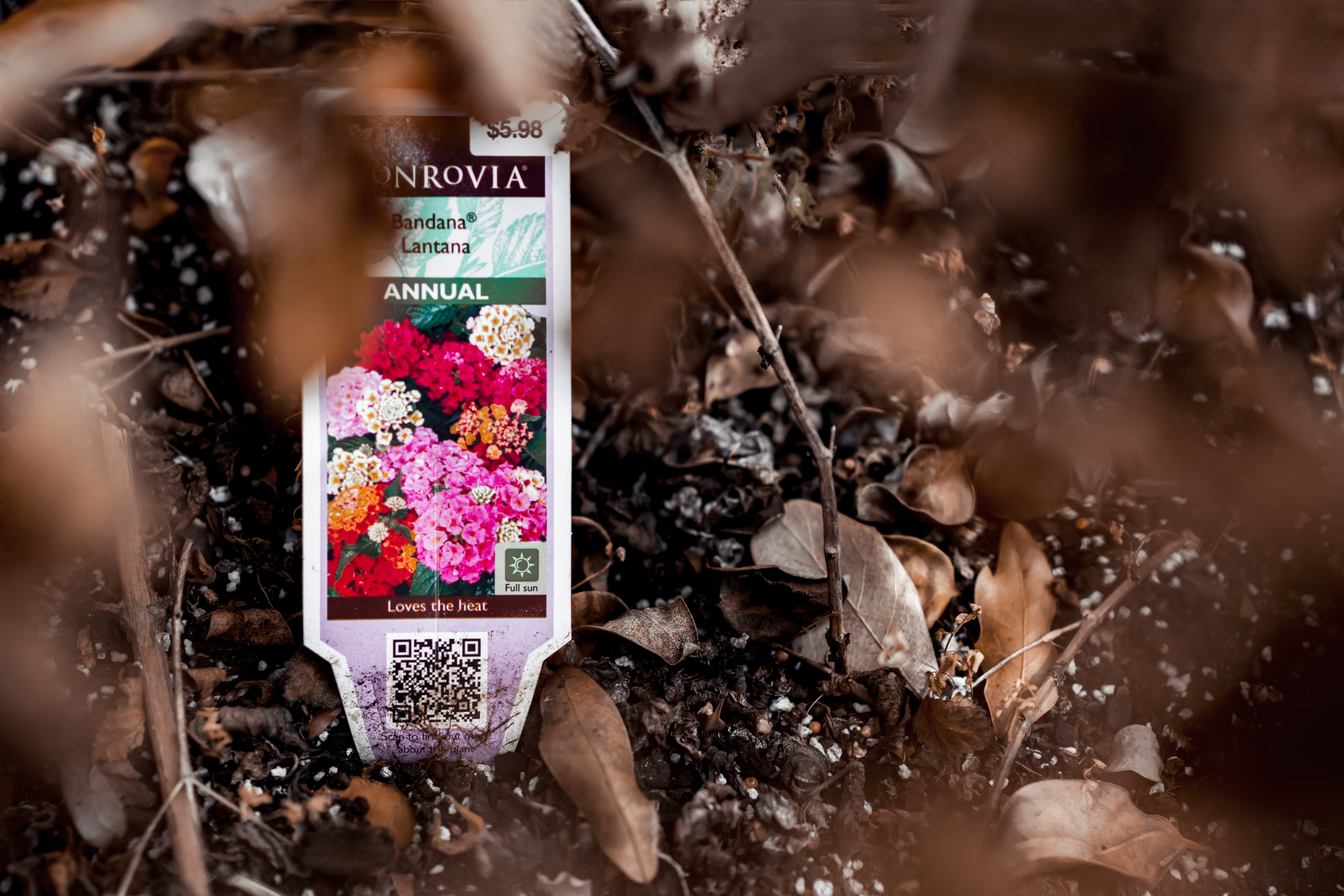